Why Selling to Big Beer Makes a Difference

What does this say about Big Beer? 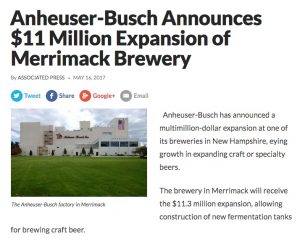 Big Beer seems to do something about once a week that gets me mad. I saw this article today and got really upset:

Especially the part that says: “The brewery in Merrimack will receive the $11.3 million expansion, allowing construction of new fermentation tanks for brewing craft beer.”

This is why “selling out” is a big deal. It’s not about the money that the owners make (good for them!) and it’s not about the access to good beer (good for us!). It’s about the local impact. ABInBev is expanding NH brewery to make room to produce more “craft beer.” Well, unfortunately, that means money that’s NOT spent in Asheville (Wicked Weed), Denver(10 Barrel), Los Angeles (Golden Road), or Seattle (Elysian).

You might ask, “do those cities need more money?” – But the issue isn’t necessarily the money. Craft Beer – local craft beer – creates more jobs per barrel than macro beer. ABInBev has about 200k employees GLOBALLY. Craft Beer IN THE US employs over 117k people and produces something like 20% of the volume of beer. Half the number of people but only 20% of the US production volume (and those figures are from two years ago!).

Don’t get me wrong, an $11M investment in Merrimack  NH (my bad!) is good for Merrimack. I’m not an economist, but I would expect that a $1M investment in 11 different breweries would yield more local economic impact, more jobs, and more opportunities than one big investment.

But, This is What They Do

This is the modus operandi we’ve come to expect from ABInBev and, to be fair, any other member of Big Beer as well. They buy an undervalued asset, reduce redundancies, achieve economies of scale, and capitalize on the brand while they can. And, candidly, they sort of have to. They have a responsibility to the shareholders to deliver profits. If they can’t do that, they’ll be the unemployed ones. This process is firmly in the wheelhouse of the corporate world from Big Beer to Cerberus Capital (Remington and Chrysler) this is what they do.

Well, there’s not a lot actually. If you’re a brewery and have a modicum of success, you’re going to have more demand than you can meet. You want to grow and meet the demands of customers and get more good beer to more people. You can take the route that Stone Brewing has taken (Richmond, Berlin, etc.), just like Green Flash and Lagunitas (before they sold to Heineken). But that’s capital intensive and fraught with debt pitfalls. Or, you can determine to say small/regional – like Russian River or the Alchemist. But, those strategies only work so long as there’s strong leadership opposed to large or untethered growth. It takes leadership with the conviction to turn away from multi-million dollar personal profits in order to steer their own ship. When that leadership changes or falters (like someone wanting to retire – hey! you can’t blame them!) that commitment starts to wane.

Then, there is the siren song of Big Beer, large dollar signs, and a life of leisure. Hey, we like this business, but we don’t do it JUST for fun. I’d like to have vacation time and stuff too! I’d like to pay off my house sometime in the next 100 years.

So, the option is to sell to someone who can take the company to the next letter. But you lose the control and focus. And the local impact.

So, What Am I Pissed About?

The issue that Big Beer – like ABInBev – script a statement for the people they purchase. “Hey, we’re still the same!” “We’re still a local brewery!” “Nothing will change!”

The rhetoric means one of a few things (and neither are good). It means that