The Role of Big Box Stores in Craft Beer 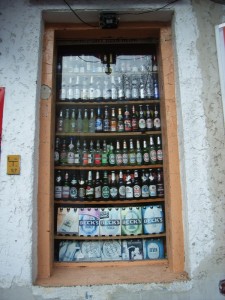 So, the other day, I was taking a good friend (but neophyte beer guy) to a great little beer store near me. When we got to the store, we got out of the car. Now, I happen to know that this place has one of the greatest beer selections in the area, but my friend’s response on seeing the place was, “Eww. In there? Really?” It took me a second, but I did a double take of the building and thought, “Well, it does look a bit of a hole-in-the-wall.” [skip forward about 45 minutes]. Sure enough, as we were leaving, he said “Wow, you wouldn’t think that they had such great beer by looking at it!”

It got me thinking. My friend’s only previous experience with a “craft beer store” had been either the grocery store or a “Big Box” beverage store. And, by “Big Box” store I mean, one of those warehouse-esque stores that has a couple thousand labels of wine, a couple hundred different beers, glasses, wine supplies, snacks, and cigars (I still haven’t quite wrapped my head around that one yet). And so, my friend’s experience was of wide and tall isles neatly organized with bar-code style labels in front of every row of product under glaring fluorescent lights with shopping carts.

Are they good for introducing people to craft beer in neutral or familiar setting? They sell a lot of beer, relative to most small independent retailers, do they have too much bargaining power with the distributors? Most of these businesses have a non-trivial web presence. What about online sales from these guys?

Now, my personal belief is that there is a place for these Big Box stores in the craft beer market. Specifically, it is an easy introduction to craft beer for the neophyte that’s going out on their own for anew beer voyage. But it’s also a dangerous introduction. It’s also easy for the uninitiated to mistake an old beer for a rare beer. And, as the initiated know, an old beer stored under fluorescent lights at room temperature can really be a not-good experience and, in this case, could turn someone off of that particular style for years.

What do you think?