Transfer of Beer Between Breweries

*This information is taken from the TTB. The full article can be read here.

The TTB recently made a change in how they interpret the law. Previously, federal law allowed only breweries of the same ownership to transfer beer between them without paying tax. Now, brewers can transfer beer between breweries not of the same ownership without payment of tax. The transferred beer can be mingled with beer at the receiving brewery. The receiving brewer is liable for the tax on beer lost in transit. 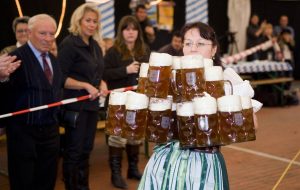 The invoice must show that the beer was transferred without payment of tax, and contain the following information:

If the beer is consigned to another brewery while in transit, then the shipping brewer must prepare a new transfer invoice to the new brewery and void the original transfer invoice.

For the receiving brewery: report the receipt of the beer transferred on either:

If you have any questions, please do not hesitate to email me at john@beerlawcenter.com or call 919-335-5291.