Like everyone ever, I saw the Wicked Weed announcement yesterday about the “partnering” with ABInBev. I don’t normally spend a lot of time commenting on purchases of craft brewers by larger breweries. My general response is: 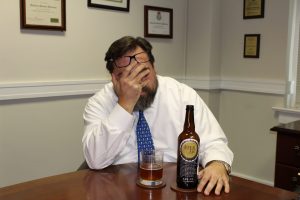 Only the third dumbest thing I saw or heard today.

But this article from USA Today, Anheuser-Busch snaps up North Carolina craft brewer (https://www.usatoday.com/story/money/nation-now/2017/05/03/wicked-weed-brewing-anheuser-busch-partnership/309733001/), made me stop and take note.

Says some things that are a bit troubling. There are comparisons of Wicked Weed to Goose Island, 10 Barrel, and other recent purchases from AB-InBev. Here’re my thoughts on those comparisons:

First, the good about being bought:

Number 1 – Being in NC, now I can actually get a couple 10 Barrel beers and Goose Island’s Sofie is always on the shelf at my local grocery store now. That’s good right? Number 2 – Uh… there’s something else here somewhere… give me a minute….

These brands have started to lose their soul and it’s evident in a few key areas.

Take Goose Island for example. When the purchase happened there was a lot of talk about how this is just access to “additional capital” and “distribution channels.” But, John and Greg Hall left almost immediately(2). And I get it, some times you want to actually retire! But then… he’s also doing Erie Neighborhood House and Farm Tier (3) – so, slowing down may not have been all of it for John. And Greg Hall is now off with Virtue Cider (4), so that’s not the only reason he wanted out from AB either. And, there are mixed feelings for those in Chicago about how well ABInBev is running and reproducing Goose Island Beers (5). Now, the Hall’s are barely mentioned (if at all) on the Goose Island Wikipedia page (6). Even at the time, Brett Porter, brought on from Deschutes to be the Head Brewer at Goose Island seemed like a good idea. But Mr. Porter is now “Director of Craft Innovation and Brewing, The High End (Goose Island, Blue Point, Elysian, 10 Barrel Breweries)” (7) which sounds like a cool job, but it’s not making Goose Island Beers either. We know that several Goose Island beers are made in other AB facilities. Is it still a Chicago brewery? A Chicago local? Nope.

Then, let’s talk about Devils Backbone. I was an early advocate for their beer. Loved everything they did. Took several trips a year up to their Basecamp just to have their beer (and attend the VA Craft Brewers Festival!). Was thrilled when they started distributing to NC. After the ABInBev purchase, they – weirdly – sponsored HomeBrewCon (formerly known as the National Homebrewers Conference, 8) the next year in Grand Rapids MI. And, rather than having some homebrew dudes or brewery staff at the conference, on “Pro Brewers Night” (when homebrewers from around the country get to try beer they don’t often see) DB/ABInBev had a huge display and sent three or four scantily clad girls in their mid-20s who knew nothing about the beer. Beer Geeks don’t appreciate that. The lines for Devil’s Backbone beer that night were short. And, here in NC, the distribution is lagging – badly. On a regular basis I find DB Eight Point IPA on the shelf that’s 6-9+ months old, and dusty. There’s very little support for DB in their adjacent state!

How about Elysian? Dick Cantwell, a scion of the industry – who literally wrote the book on how to open a craft brewery (9) immediately resigned (10, 11). And, the Space Dust I can get here in NC doesn’t match my memory of the beer from the pacific northwest. So, distributing yes. Helping the reputation, not as much as you might expect – it’s now just another brand on the shelf (next to ShockTop).

How do I know?

Now, I am not saying these things are absolutely true. But I have cited most of my sources (below) and what I haven’t cited, I’ve observed myself. And the opinions are my own. But, they seem pretty justified from my perspective or perception.

Quotes from the article are… bizarre in light of the previous acquisitions:

“Dickinson asserted that the brewery would continue to retain a large measure of autonomy when the sale to the beverage giant is finalized.”

“A large measure of autonomy?” How’s that working out for Devils Backbone, who have apparently lost all control (or care?) about their distribution in a neighboring state?

“’I think everyone out there needs to understand that we’re still an Asheville brewery, [Dickinson continued]’”

Nope. You may work in a brewery in Asheville, but you’re not an Asheville brewery anymore. You’re a Belgian brewery, just ask Wikipedia (https://en.wikipedia.org/wiki/Anheuser-Busch_InBev).

Me and Wicked Weed

I’ve been a huge fan of Wicked Weed for years. I’ve muled Wicked Weed across the country to share with friends and family – proud of the amazing beer that WW makes here in NC. And, I’m sure that they’ll continue to produce amazing beer. But, I don’t appreciate the white-washing of the sale. That’s what it is, a sale. I’m glad some good people made some great money on this (good for them!), but my relationship with the brand will never be the same.